I have just returned from 40 days at sea aboard the NOAA Ship Ronald H. Brown as a participant in the fourth Gulf of Mexico Ecosystems and Carbon Cruise (GOMECC-4). This cruise was organized by chief scientists working at NOAA’s Atlantic Oceanographic and Meteorological Laboratory (AOML) in Miami, FL, but included researchers from around the world working at institutions throughout the United States and Mexico. These scientists were collecting samples and data to answer questions about the carbon cycle and ocean acidification in the Gulf of Mexico as well as about the open water ecosystems throughout the Gulf by collecting data along transect lines running from shallow coastal sites to deep offshore sites. In total, the Brown travelled over 5000 nautical miles sampling throughout American and Mexican waters-the Brown actually became the first research vessel to be given permission to work in Mexican national waters since Mexico’s Covid 19 precautions were put into place. I was a member of the science crew with an official position as a “CTD watch stander”, as well as collecting data for my own research during the cruise.

As CTD watch stander, my job was to supervise the deployment of the Conductivity, Temperature, and Depth (CTD) instrument. This instrument had sensors that allowed real time sensing of the salinity (measured by differences in conductivity), temperature, depth (as a function of water pressure), dissolved oxygen, and chlorophyll concentration, an Acoustic Doppler Current Profiler (ADCP) that measures current speed using sound, and 24 Niskin bottles that can be triggered to collect water from different depths in the water column. Deploying the CTD could be a long process, depending on water depth- some sites were over 3500 meters deep, and winching it to the seafloor and back up again at those sites could take over 3 hours. When it returned to the boat, water samples would be collected from the Niskin bottles by members of the science crew and analyzed for chemical parameters relevant to understanding the carbon system, including temperature, dissolved oxygen, pH, dissolved inorganic carbon, total alkalinity, and CO2 content, measurements more relevant to understanding the whole ecosystem, such as salinity and dissolved nutrients, and the use of cutting edge environmental DNA methods to identify organisms living in the water by the DNA they leave behind in the seawater.

My primary motivation for joining such a long cruise was the opportunity to work directly with one of my NOAA mentors, Dr. Emily Osborne, who was sailing with the cruise to deploy automated biogeochemical sensing floats and to take sediment core samples. As a postdoctoral researcher with the NOAA Center for Coastal and Marine Ecosystems, I will be spending at least 6 months as a researcher at AOML working with Drs. Emily Osborne and Luke Thompson, learning how to employ genetic sequencing methods to create genetic “barcodes” that can be used to identify the presence of abundant Gulf of Mexico planktonic foraminiferal species commonly used in paleoclimate applications. This work will help enhance the accuracy of environmental DNA analyses in the Gulf, which are currently missing barcodes for these widespread species, and as these species are commonly used in paleoclimate applications, this work will also play a foundational role in adapting eDNA approaches to the study of the paleoclimate record. On this cruise, I collected planktonic foraminifera from plankton net tows being performed to assess the planktonic community and will use these samples during my residency at AOML in 2022. I also assisted Dr. Osborne in the collection of sediment cores using an 8-core gravity multi corer, collecting cores to be used as part of the same project as my genetic work as well as cores for my own future research in conjunction with colleagues at FAMU. 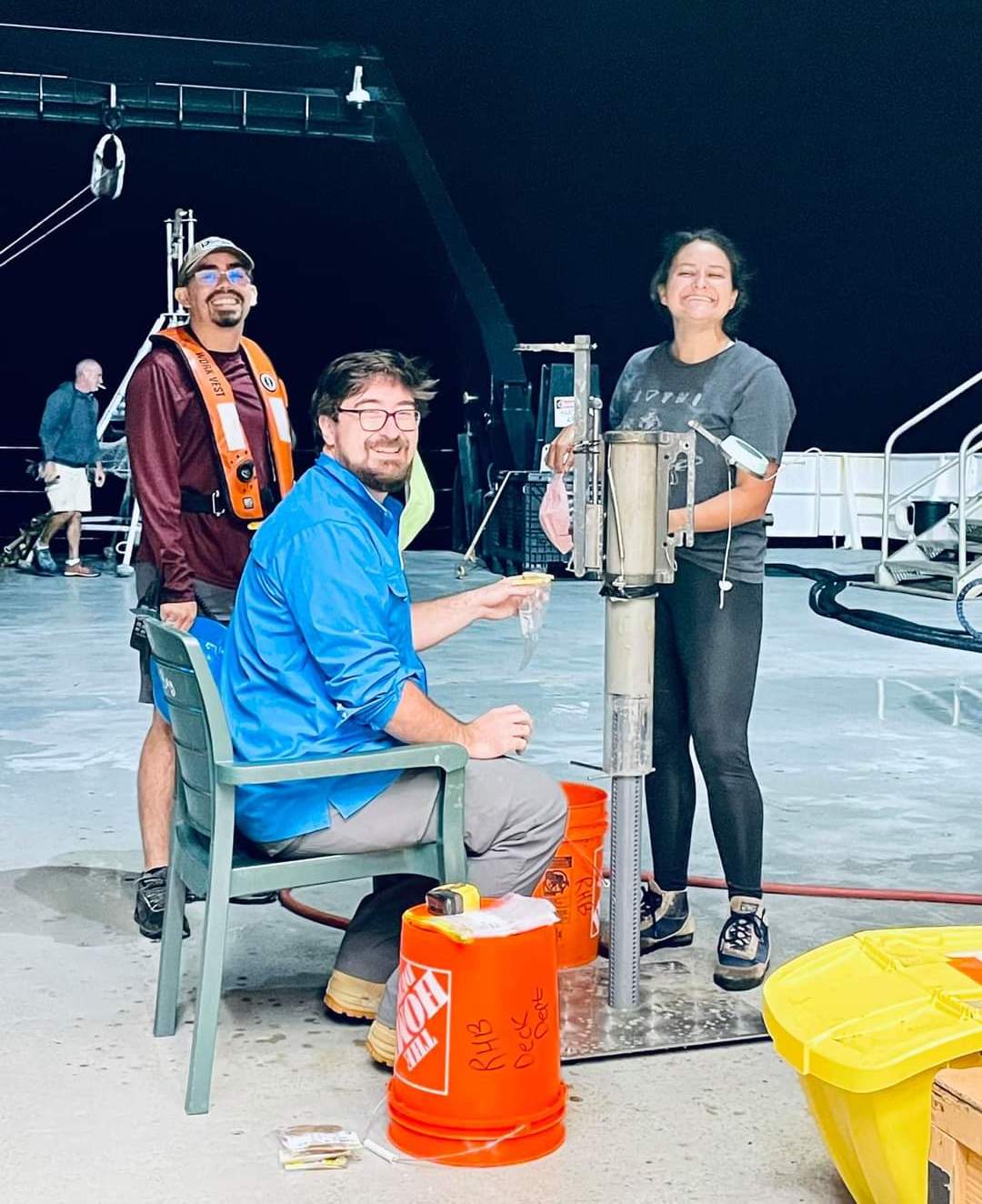 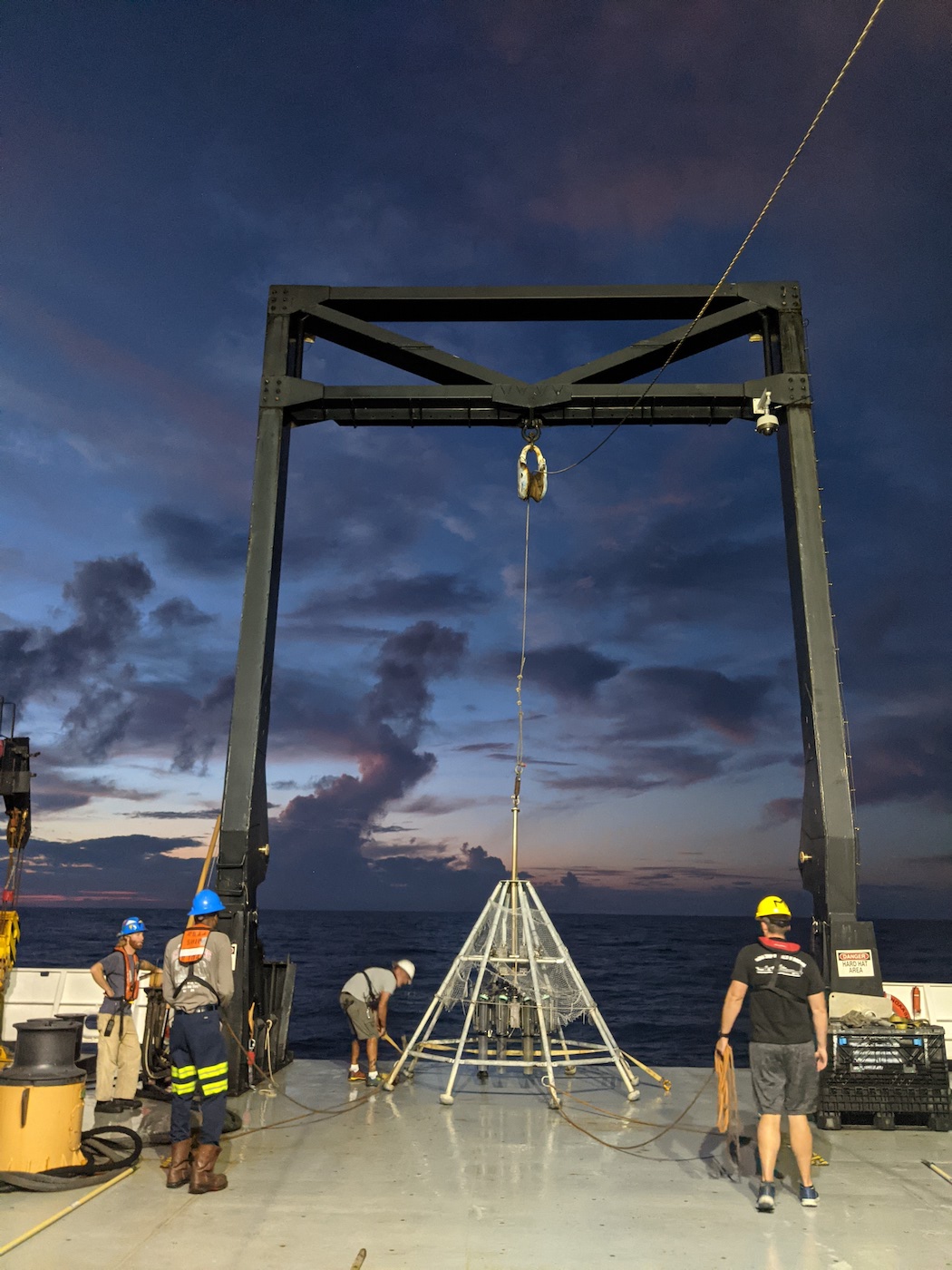 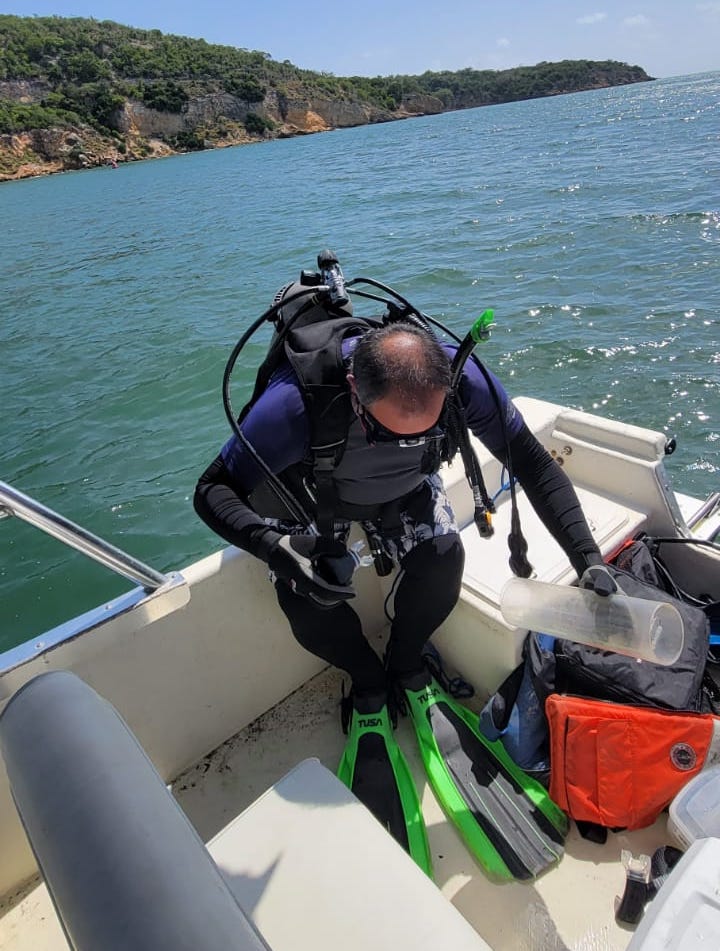 Dr. Michael Martínez-Colón spent eight days (10/22/2021 – 10/30/2021) in Puerto Rico doing field work for a research project funded by Puerto Rico Sea Grant. One of the sampled estuaries, Guánica Bay, has been under the influence of anthropogenic pollution since the 1900 but more severely since the 1950. The waters of the bay receive raw sewage (point source) and fertilizers (non-point source). The surrounding soils are polluted with lead, mercury, and polychlorinated biphenyls (PCB). More importantly, PCBs have been found in fish tissue, bay sediments, and in human blood from the local residents. As of September 2021, EPA is including this bay as part of their Superfund National Priority List.

To have a better understanding of the history of pollution of the bay, a 52 cm core was collected to assess the levels of pollutants (sewage, persistent organic pollutants, and heavy metals) coupled with any changes in environmental health. A radiograph (x-ray) of the G8-core shows a noticeable change in sedimentation at 34 cm and at 26 cm depth. This is a key sedimentary marker given how much of the watershed and the estuarine sediments of Guánica Bay has been altered. Radiometric dating and if needed 14-C dating will be done to get an age of the sediment layers. 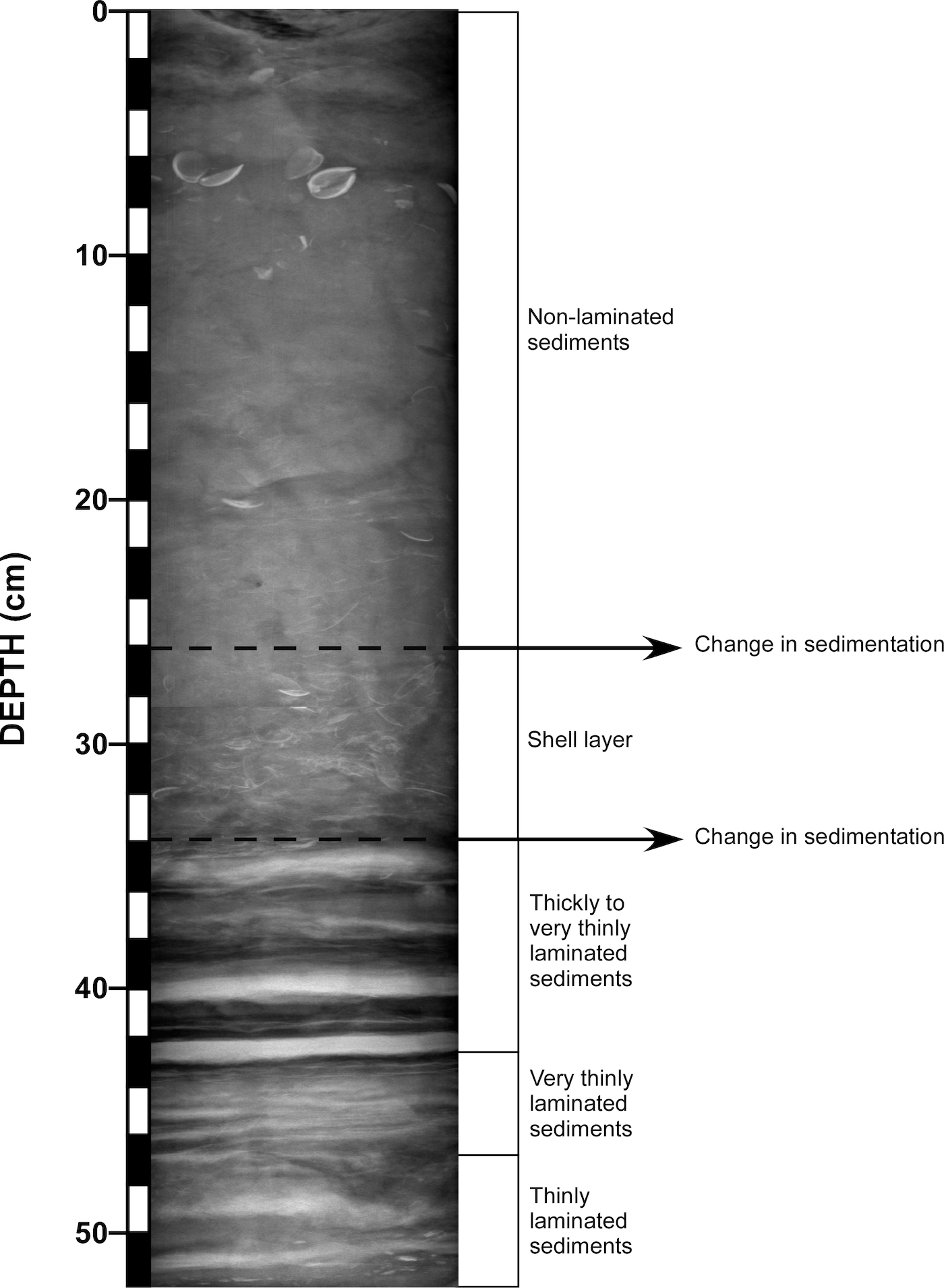 Four CCME students spent four days (9/20/2021 - 9/24/2021) onboard of the R/V Hogarth doing research sampling as part of an educational cruise experience titled “Instructional Cruise to Assess Decadal and Current Environmental Health Assessment of the central West Florida Shelf”. This initiative was funded by a grant awarded to Dr. Michael Martínez-Colón by the SLOAN Foundation. Dr. Martínez-Colón in collaboration with Dr. Richard Long and Dr. Jeroen Ingels (Florida State University-FSU) were awarded subsidized ship time by the Florida Institute of Oceanography.

The cruise took place along the West Florida Shelf in the Gulf of Mexico and the students were trained in different aspects of oceanographic sampling along a depth gradient between 25 m and 300 m transects. These experiences included: (1) deployment/retrieval of a multicorer and subsequent sampling of sediment cores (foraminifera, nematodes, grain size, organic matter, microplastics, radiochemistry, molecular analyses) (2) deployment/retrieval of a CTD/Niskin rosette for water sampling (microplastics and molecular analyses), and (3) plankton tow deployment/retrieval for microplastic sampling. These operations were done in 12-hours shifts (12am-12pm; 12pm-12am). Most importantly, students engaged in knowledge transfer by those who had prior experience which was the case of Mr. Demarcus Turner who trained students in microplastic sampling using a density separator and Ms. Ariana Uwaibi who trained students in sediment sampling for molecular work. 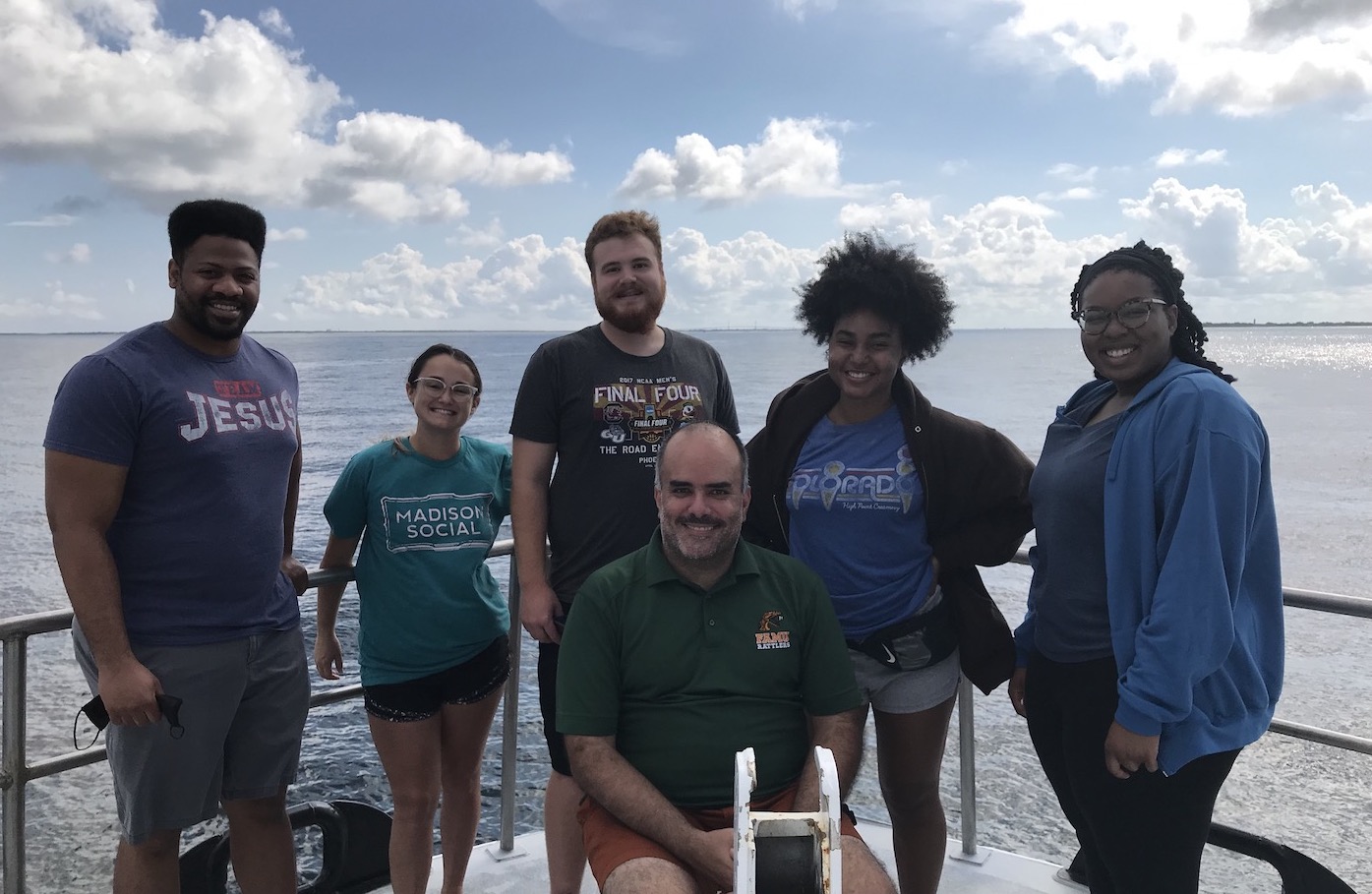 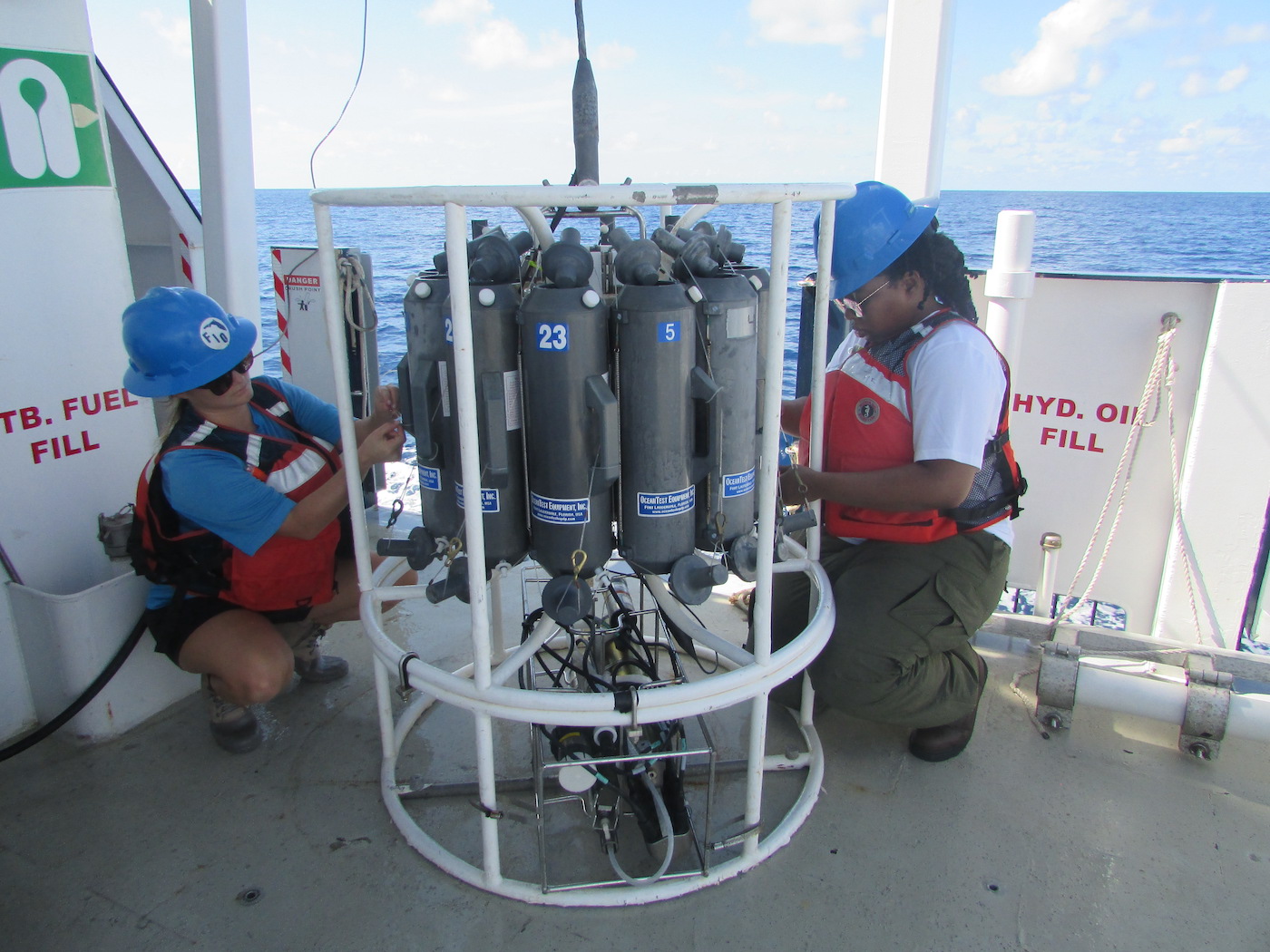 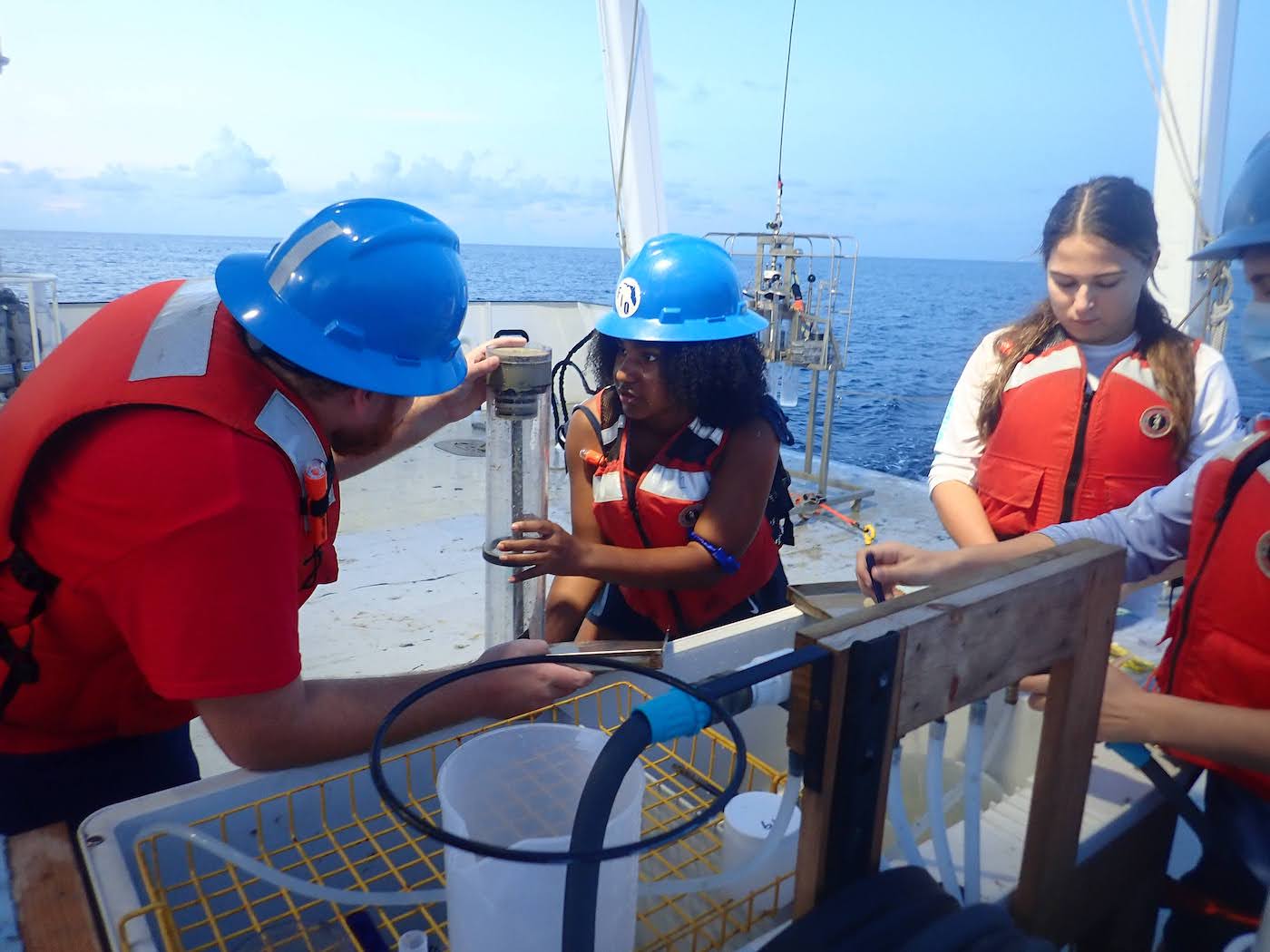 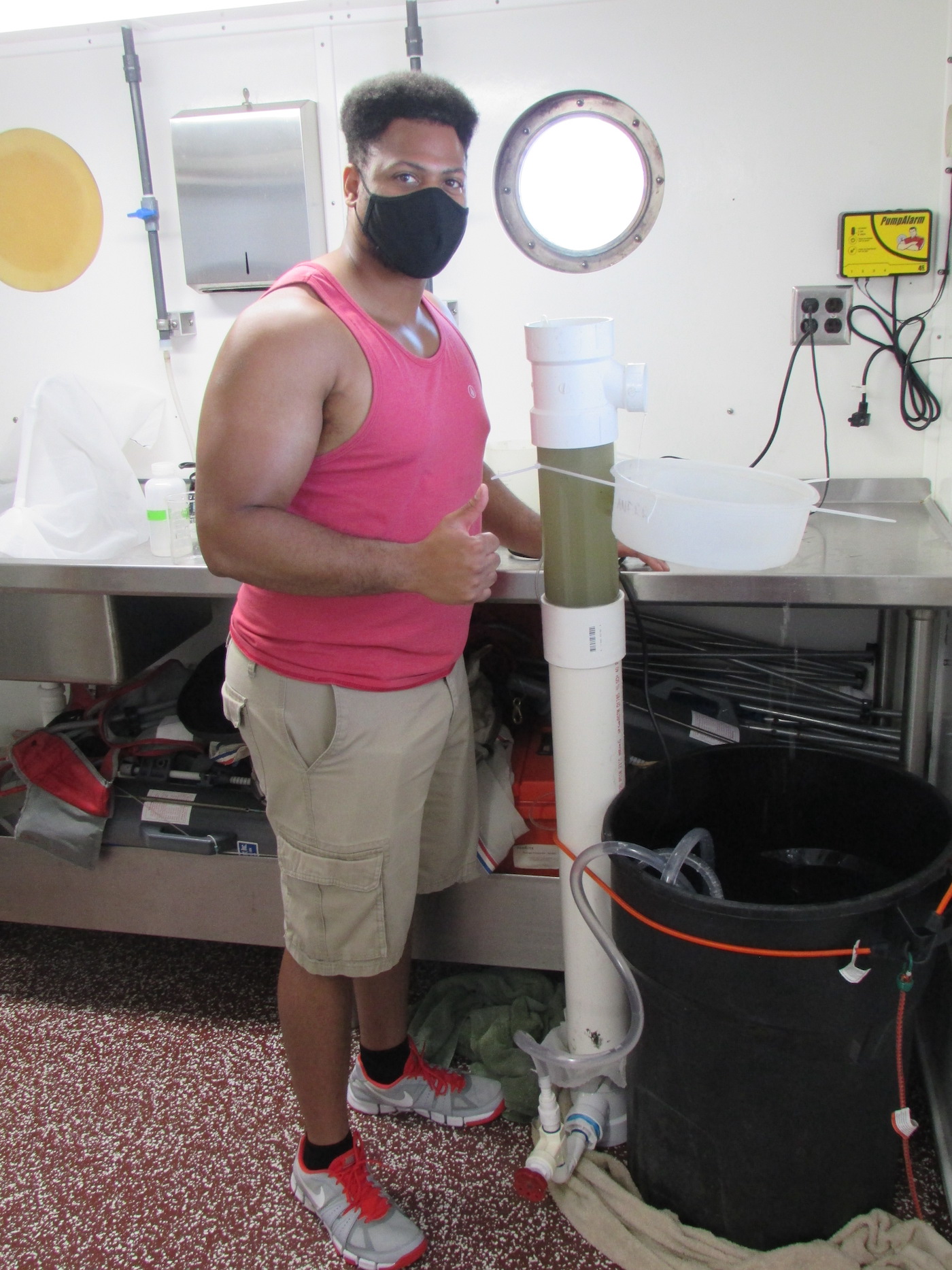 Mr. Demarcus Turner (CCME-MSc) next to his microplastic density separator 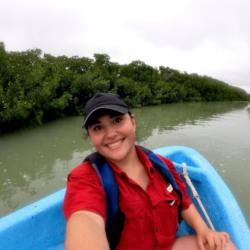 Elena Flores is a graduate scholar at the Southeast Fisheries Science Center. She is currently conducting shrimp experiments to evaluate a new tag used in shrimp. These visible marks will help monitor shrimp growth over time. She monitors retention rate, and visibility of the tags, as well as shrimp survival.

This monitoring happens mainly in coastal marshes, mangroves, and oyster reefs. Elena works with her lab group to perform other duties such as rehabilitating the wet lab facility, conducting field work, boat maintenance, and helping with other shrimp projects. With a Bachelors in Biology, she is currently working on her Masters degree in Ocean, Coastal, and Earth Sciences at the University of Texas Rio Grande Valley. Elena's thesis research is on coastal conservation investigating eutrophication effects on Black mangrove and soil gas fluxes in eutrophicated coastal blue carbon in South Texas. 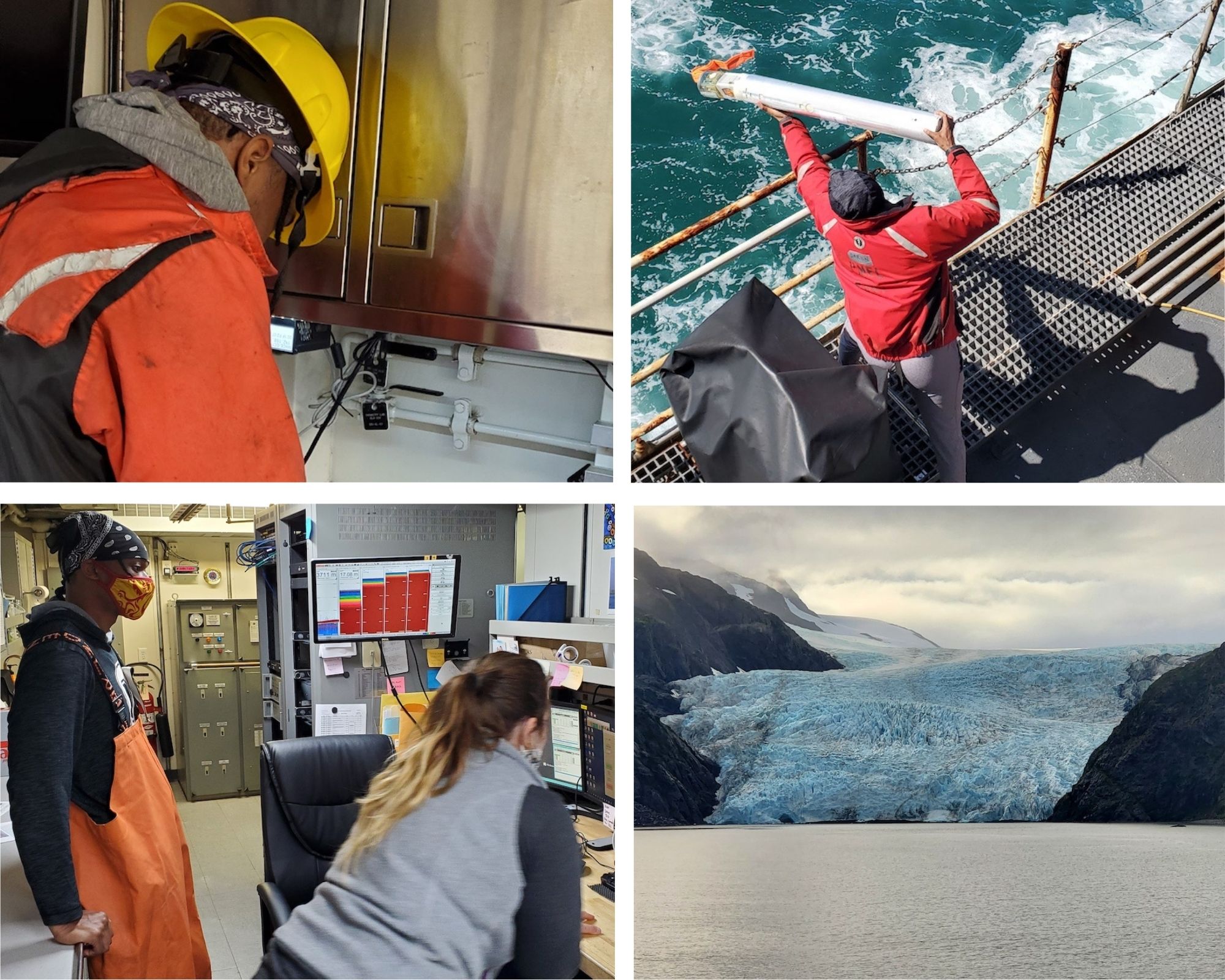 The survey had three components: visual observations, passive acoustic monitoring, and oceanographic sampling. The primary goal is to obtain abundance, density, and g(0) estimates for marine mammals. We ran a double platform, with two independent visual survey teams reporting to one data recorder. One platform was on the flying bridge, the other was on the anti-roll tank deck, which is just forward and 3 ft lower than the bridge deck. When high priority species were sighted, we obtained photo-ID photos and potentially attempt to collect biopsy samples as well.

For the passive acoustic component, which was one of my main responsibilities, we deployed sonobuoys to acoustically monitor for marine mammals. Most of the time we just collected data and recorded whatever species we could detect. However, when a North Pacific right whale was detected, we broke from survey and attempted to locate the animal (depending on how far it is, how often it's calling, etc). The NPRW was the highest priority species during the cruise. We also retrieved and deployed one long-term bottom mounted acoustic mooring near Barnabus Trough. Seeing NPRW are extremely rare and I had the honor of seeing four. Majority of the scientist and crew had never laid eyes on one and most of them have been working in that area for decades. Hearing the right whales was surreal for me. My mentor prepped me for what the whales sounded like and after weeks of not hearing them it was relieving to finally hear them when I did. They have a unique call, called a gunshot and it has that name because it literally sounds like a gunshot. It’s very loud and distinct and followed by a series of pulses. Even though I wasn’t on acoustics when we discovered the first right whales it was extremely cool to be trusted to record and visually document the surfacing of the whales for the NOAA PR team to use in their press release. I truly enjoyed getting as close as I did to the whales. It was a once in a life-time experience. My favorite part about acoustics was listening to the Orca’s speak. They were very entertaining and made an array of different calls especially after a meal, sometimes they got so excited they breached the water. I gained a deeper appreciation from listening to them and seeing them up close and personal.

Finally, every evening after visual ops were done, we conducted a CTD cast. Which was another one of my responsibilities. We casted a CTD every night at the depths of 0, 25, 50, 100, 250, 500, 1000, and max depth. This was the oceanography of portion of my NERTO. I learned a lot about the purpose of conducting CTDs. I learned how to identify if there was anything off with the CTDs we conducted. One cool thing we did was draw on cups, put them in a bag, and attach them to the CTD machine. We then sent the cups down to max depths and when they returned the cups were crushed from the pressure of the ocean.